I consider myself some sort of green-black thumb hybrid. I excel at dealing with the dead things (weeding is therapeutic), but the growing/keeping alive part is intimidating. So, I count my gardening efforts this Summer to be a major success.

What do those gardening efforts look like, you ask? Resuscitating a vine whose bloom I was positive had faded, fighting the heat to keep two tomato plants alive, and nurturing a basil plant from infancy to flourishing adulthood.

The latter was my shining gardening accomplishment. Mostly because my mom was the one who actually discovered the vine wasn’t dead and there’s a distinct difference between alive and thriving when it comes to my tomatoes. But the basil plant, in it’s hot pink, dollar store beach bucket has gone from baby to burgeoning over the past three months and I am oh, so proud.

What makes the basil success even sweeter (herbier?) is that we’ve used it! Tiny slices made their way into cheesey eggs and crockpot marinara. Handfuls went into a delicious pesto we ate on homemade pizza.

My endless supply of basil prompted this new take on Chile Egg Puff. It’s cheesy, eggy foundation is the perfect base for endless variations. This particular version plays on the classic Italian caprese salad of mozzarella, tomatoes, and basil.

I nixed the chiles from the original, adding diced fresh tomatoes and tons of julienned basil in their stead. Out went the cheddar and in came the mozzarella.

It may be sacrilege to the memories tied to the original Chile Egg Puff, but I might like this version better. Maybe that’s the basil pride talking… Either version has the same appeal – a protein packed, cheese riddled egg soufflé perfect for any meal of the day. Both egg puffs have been great to have around during No Sugar September.

A note about the tomatoes: I’m fairly particular about removing all tomato boogers before dicing. Cut tomatoes into quarters and run your thumb around the inside to loosen the snotty seeds. Discard and proceed with dicing your now booger free tomatoes.

To chiffonade basil: Stack basil leaves together. Roll into a little basil log. Place your basil log on a cutting board and hold in place. Slice through the basil log as thinly as possible. Separate all the tiny basil ribbons you’ve just created and resist the urge to throw into the air like they were dollar bills. 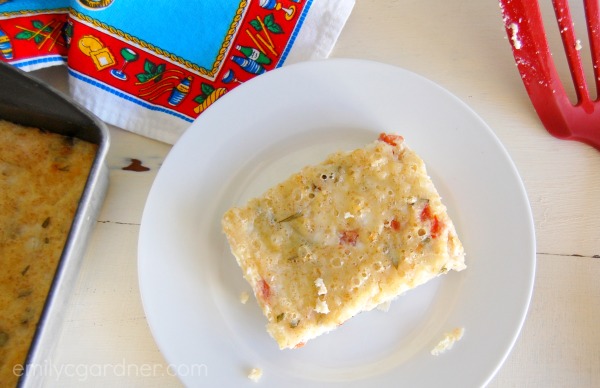 For me, cooking is a joy and a stress reliever. I love the process – gathering, mixing, stirring, chopping, creating – but sometimes I don’t have time to immerse myself in that process. And there are some days when the process I enjoy so much just sounds burdensome. Enter one of my new, faux-process dinners: pizza using a store bought crust.

Pizza crust isn’t too difficult to whip up, but on those nights when I’m tired or low on time, store bought crust is a short cut that allows me to serve a home cooked meal with little effort.

Bread is my culinary best friend, so my tastes gravitate towards pudgy, thick pizza crust. However, my love handles don’t always appreciate my carb-laden chum, so Tim and I have been making our pizzas on whole wheat, thin crusts we found at Target. (This isn’t a sponsored post, just FYI.) It’s square, fairly low calorie, and thick enough to be chewy not crackery.

I’m always down for the standard cheese and pepperoni, but it makes me feel more grown up to be creative with our toppings. Plus, that helps me justify having pizza twice in a week (because you have to use both crusts, right…). 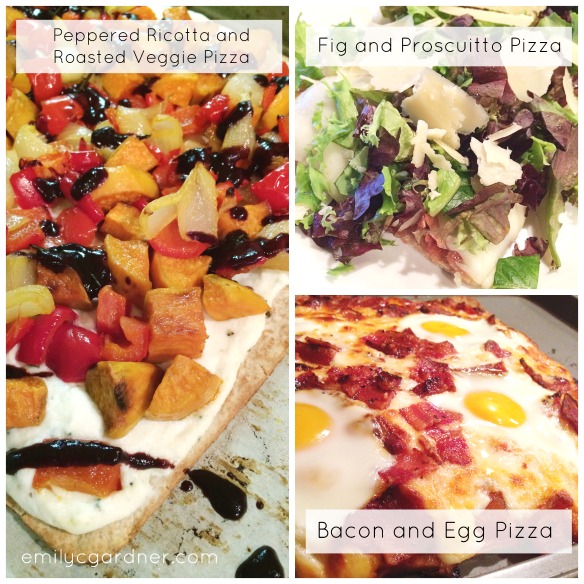 Fig Proscuitto Pizza – based on this from Pioneer Woman.

Sweet, salty, gooey with a fresh bite from the arugula. Eat it with a fork.

Bacon and Egg Pizza – based on this in Food Network Magazine.

Breakfast for dinner is a favorite. Breakfast AND pizza? Yes, please.

Roast all your leftover vegetables and throw them on top of some creamy ricotta. A drizzle of balsamic vinaigrette would be a tasty substitution for the red wine reduction.

Is pizza in your meal rotation? Do you make your own crust? What are your favorite toppings?

When I have time to make homemade pizza crust, I’m going to follow these 9 tricks for making amazing pizza from Erika over at Let Why Lead! 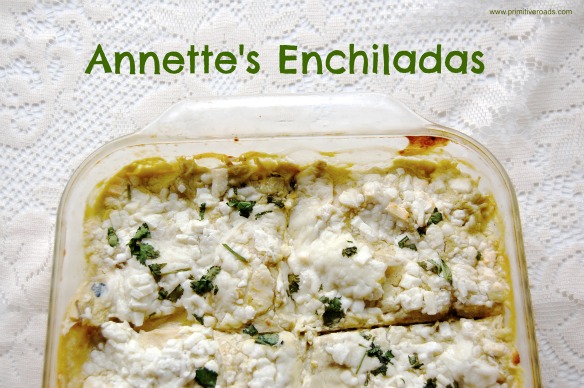 If you read Sunday’s post you know I’m trying to be intentional about inviting people over for dinner, despite how vulnerable that makes me feel. My dear friend Sarah came to visit in March and we took the opportunity to do just that – cook for others and feel vulnerable in the process (well, at least I did…). We decided to make a meal from the recipes found in Shauna Niequist’s new book Bread and Wine and invited some acquaintances who Tim and I were hoping would become friends. Baby steps to community…

Sarah and I made three of Shauna’s recipes and all of them were winners. I shared her Blueberry Crisp recipe (which my mom is now hooked on) and wanted to share another of her delicious recipes that we made – Annette’s Enchiladas.

Tim and I love Mexican food so I immediately latched onto this enchilada recipe while reading Shauna’s book. I was intrigued by the green sauce and thankful that the enchilada preparation didn’t necessitate rolling.

Annette’s Enchiladas is a casserole style dish with a zesty sauce made of sour cream and chili verde. Corn tortillas are layered with sauce, a hefty dose of cheese, and shredded chicken. Several layers later, some time in the oven, and we had a large pan of gooey enchiladas with a perfect little spicy kick. Don’t forget the sprinkle of cilantro, it really brightens up the flavor!

adapted from Shauna Niequist’s recipe in Bread and Wine

Mix green sauce with chilies and sour cream. Smooth 1 spoonful of the sauce mixture around the bottom of a 9 x 13 inch pan.

Bake until warmed through and the cheese is melted, about 30 to 35 minutes. Let sit at least 15 minutes before cutting. Top with chopped cilantro.

{Like Shauna says, this is indeed comfort food and just as delicious hot as it is straight from the fridge as a midnight snack…}